The January 26th 2018, Monsignor François Fleischmann, a great servant of the Teams of Our Lady and the cause for canonisation of Father Caffarel, left us.

"Mgr. François Fleischmann was Spiritual Counsellor to the international Leading Team from 2000 to 2006. During this mandate, he was the instigator of the launching of the cause for canonisation of Father Henri Caffarel with Marie-Christine and Gérard de Roberty, in 2003. From the very beginning, he contributed to the development of the opening procedure of the cause with his advice and experience. Then as Chancellor of the Diocese of Paris, he participated in the elaboration of all the official documents pertaining to the cause.  Above all, he was behind the digitalisation of all Father Caffarel texts: editorials in all the magazines and revues, his speeches, and diverse texts.  He was an irreplaceable connoisseur of Father Caffarel’s written works and his thinking.  He had studied L’Anneau d’Or in particular, as he showed in his talk at the Henri Caffarel. Prophet of Our Times Colloquium in December 2017.  Mgr. Fleischmann was an active counsellor within the association of the Friends of Father Caffarel and had accepted to help with the work on the Positio.  Indeed, he was great support for Father Paul-Dominique Marcovits, Editor of the cause, and for Marie-Christine Genillon."
Les Amis du Père Caffarel

Father Paul-Dominique Marcovits, o.p. Editor of the cause of Father Caffarel
A Tribute to Mgr. François Fleischmann
"Mgr. François Fleischmann was tall and rather imposing. That was my very first impression when I met him for the first time in 2005 at the Teams of Our Lady. But his eyes sparkled and creased when he welcomed someone with joy and trust. A luminous smile rounded off his way of putting someone at ease.  I was struck by the joy that dwelt within him, a joy that came from his faith in God and in his attachment to the Church.
The expression, “A Man of the Church” suit him well, since his presence was inhabited by the mystery of the Church that he loved to serve.  I had heard of him long before meeting him and I knew of the immense service he had rendered when he was in Rome at the Secretariat of State, but also at other moments in his ministry.  Therefore, when I did meet him, I always felt grander, elevated, and faced with the nobility of the Church.  His humility was deep and natural.  It is true that he did not need to put himself forward, since his work was accomplished with such accuracy and precision that his works spoke for themselves.  Even if within the Teams Movement, we called him “Father,” we also spoke of him as “Monsignor” Fleischmann.  I like that title!  It expresses our admiration and our attachment. Above all, it does not overshadow his humility…  What can I can say, François Fleischmann was of the Church!  That was where his dignity was and he was happy with this.
When in 2005, Marie-Christine and Gérard de Roberty, International Responsible Couple for the Teams of Our Lady, named me as postulator to the cause of Father Henri Caffarel, with Marie-Christine Genillon as vice-postulator, Mgr. François Fleischmann was present too throughout all the work and right up until today.  He knew everything that had to be done, he knew everyone.  His judgement was sure and I and all those who worked in the Association of the Friends of Father Caffarel, we listened and paid great attention to everything he said.  I often used to say to him, “I follow you.  I walk behind the luminous cloud.”  I never did anything of importance without first talking to him.
Though out the years when we were doing the diocesan enquiry on Father Caffarel, Mgr. Fleischmann accomplished great work in particular concerning digitalisation.  How many times did I see him put a huge file on the table, simply, as if it had no particular importance.  There again, his humility and his love of work well done can be measured.  He worked for Teams, his second family!
Mgr. Fleischmann was born in Alsace (Eastern France), in the very beautiful town of Barr. When he came to see me—I had just left my convent in Paris for the one in Strasbourg—we went together to his native country.  It was very moving.  His life took place mainly in Paris, but I will always remember the light that inhabited him during that pilgrimage.
Monsignor! Dear Father! You left too soon. As the Editor of the cause of Father Caffarel, I counted on you completely. We are going to miss you so much.  But now that you are beside God, you are with Father Caffarel and can talk directly to him.  May you and he intercede for us… for this cause as well, that is the cause of marriage and prayer!"

Dear Friends,
We are assembled today to pay tribute to Monsignor François Fleischmann, who is no longer physically with us, but who, through his manner of being, his works and the memories he left us, will always be present…
The wisdom with which he enriched the Teams of Our Lady Movement during his mission as Spiritual Counsellor to the International Leading Team, from 2000 to 2006, and his commitment marked by discernment in the service of the Cause for Canonisation of Father Caffarel will always remain a remarkable contribution to the procedure underway.
As Counsellor to the Association of the Friends of Father Caffarel, he greatly contributed to the success of the international Colloquia on Father Caffarel that were held at the Collège de Bernardins in Paris in 2010 and in 2017.
Monsignor Fleischmann was someone of great discretion and humility, despite his great talent and culture; he always knew how to communicate strong and inspired words that profoundly marked us in our lives.
Personally, we have many wonderful memories of his friendly presence and of the benevolent way in which he expressed his ideas. Furthermore, he always was quick to respond to our calls.
The Teams of Our Lady Movement are very grateful for his devotion, serenity and inestimable competency and are united in prayer for this great Servant of God.
Paris, February 2nd, 2018 – Montparnasse Cemetery
Tó & Zé Moura Soares

Testimonials are flooding in, and we would like to share with you particularly that of Father José Jacinto Ferreira de Farias, scj, Spiritual Counsellor to the International Leading Team.
http://www.equipes-notre-dame.com/en/life-of-the-movement/news/monsignor-francois-fleischmann-a-great-servant-of-the-teams-of-our-lady 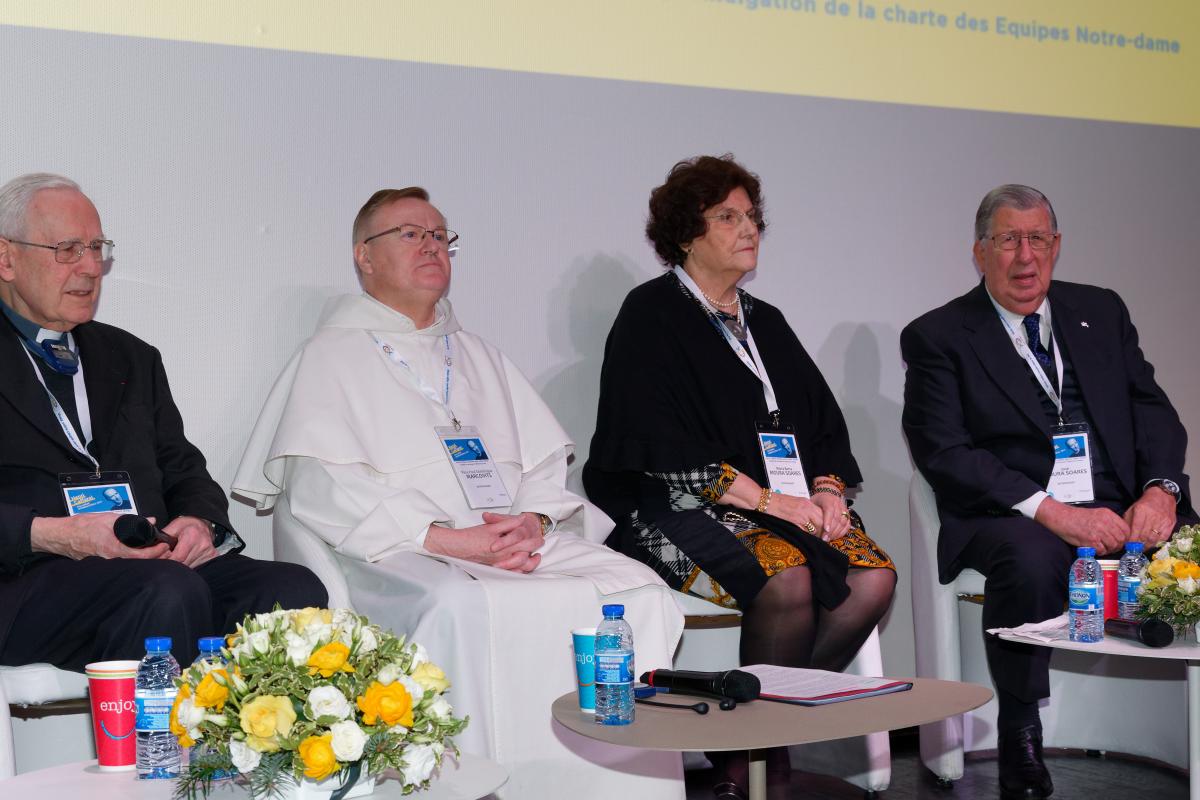 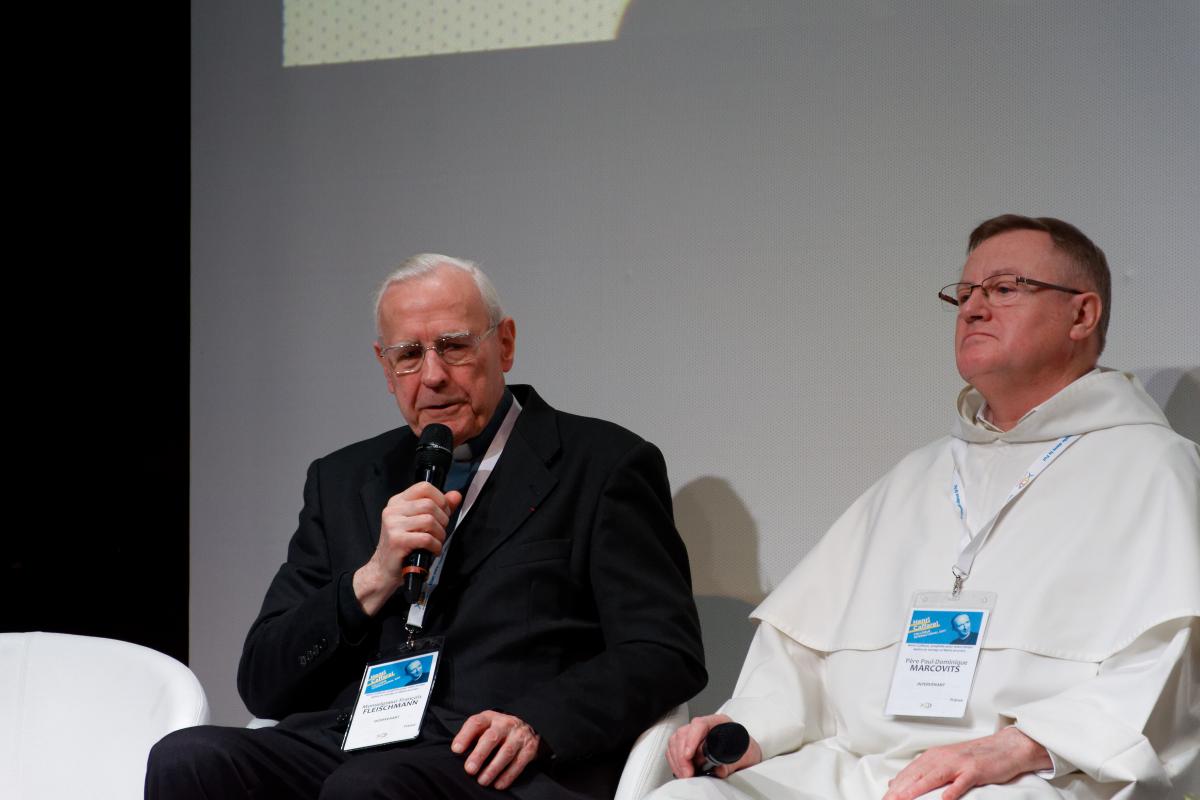 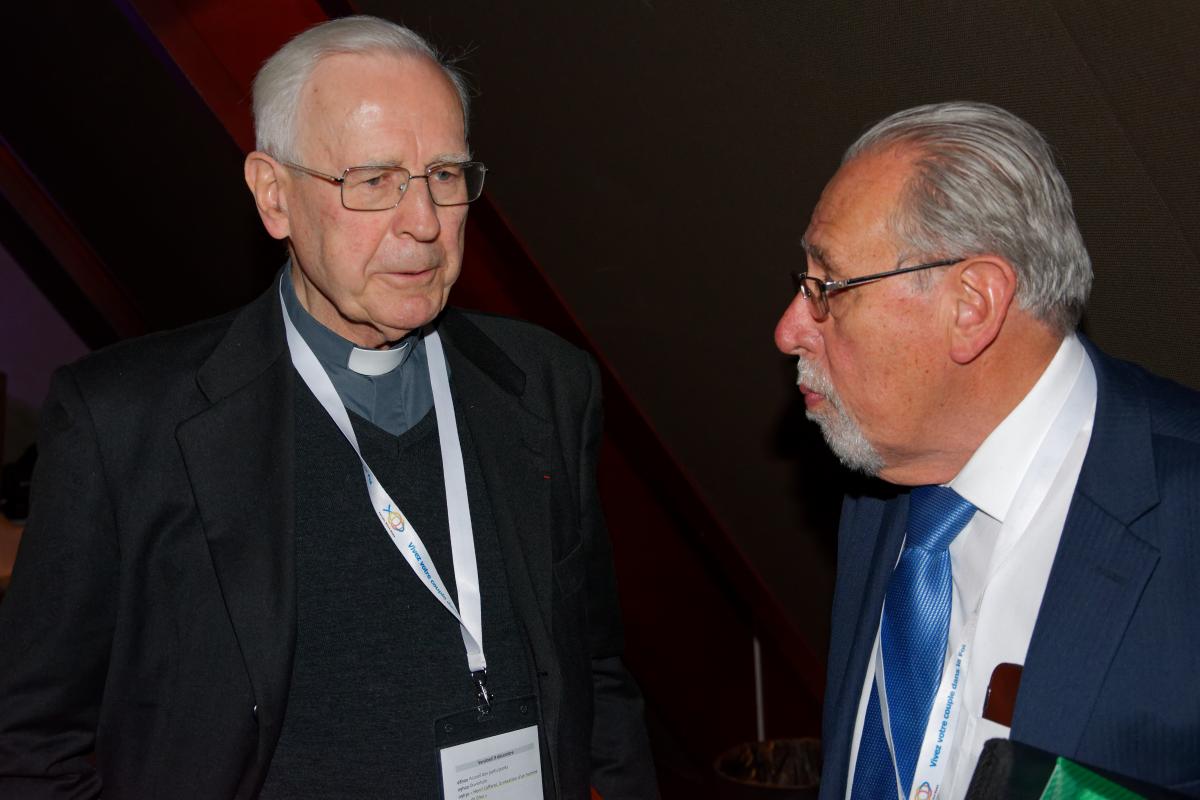 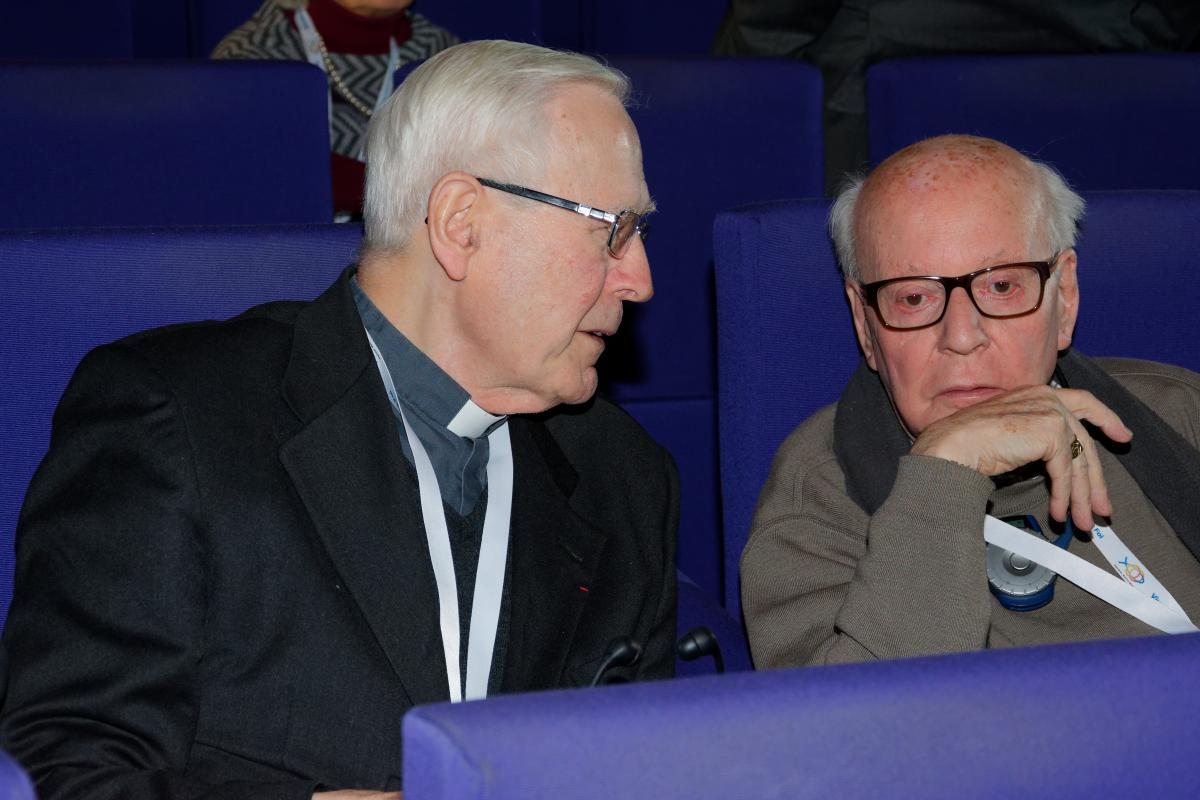 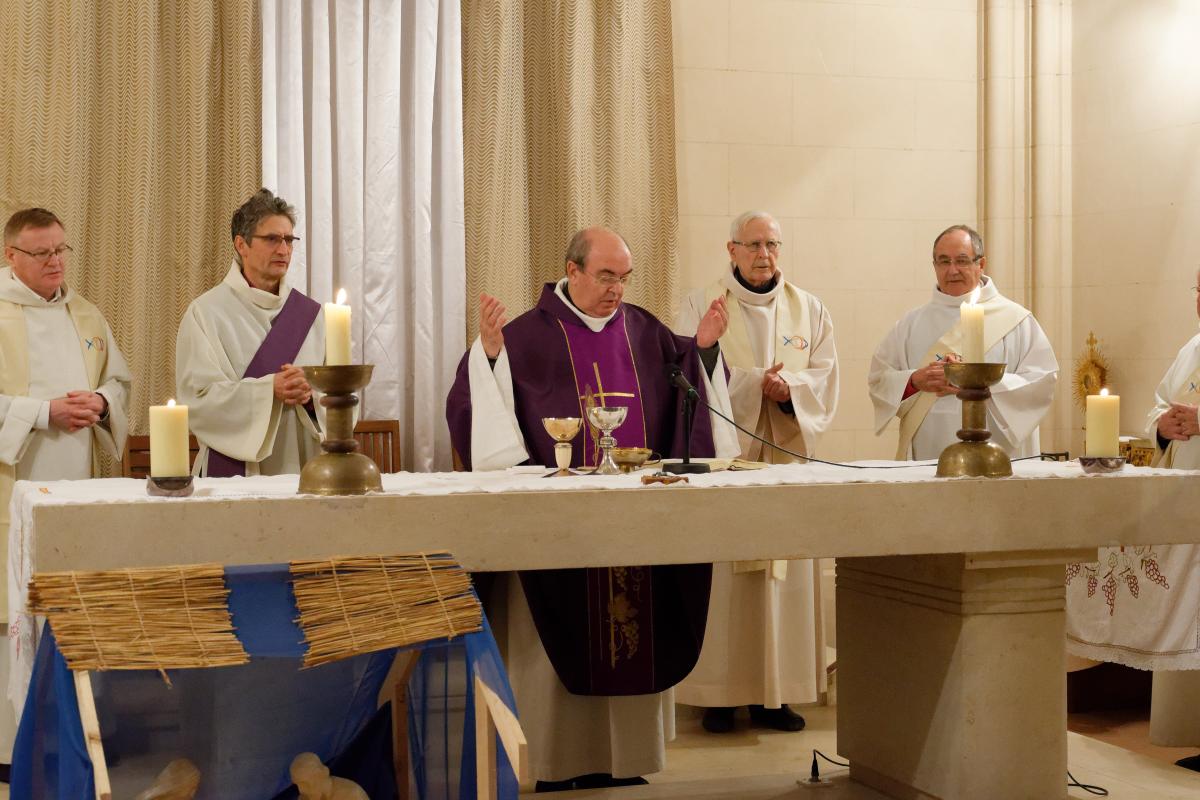