A Colloquium entitled Father Caffarel, A Prophet of our Times, an Apostle of Marriage and a Master of Prayer was held in the Collège des Bernardins, Paris on December 8th and 9th, 2017. 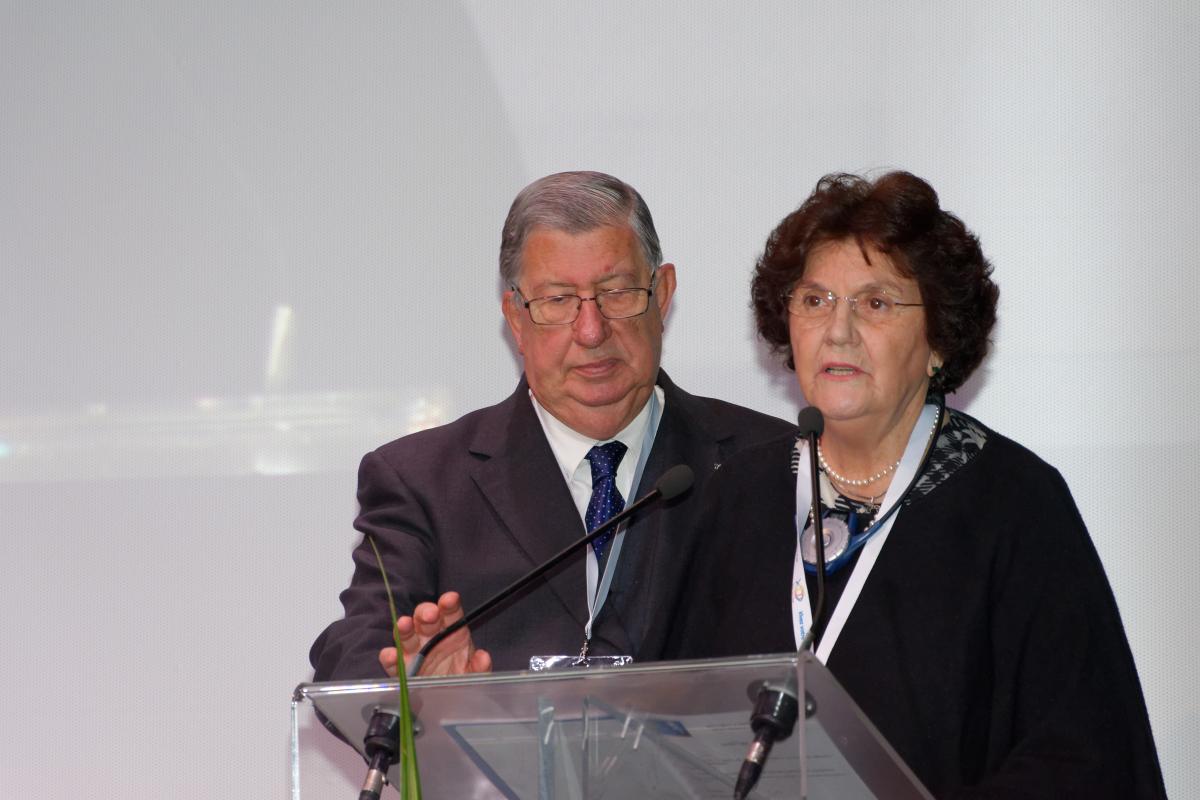 The Talks and Round Table Discussions during the whole Colloquium
Friday morning. The first session was entitled, Henri Caffarel, the Vocation of a Man of God. Rémi & Françoise Gaussel, Team members from France and members of the International Leading Team, presided over this session.
“And that is what changes some one’s life: the day they discover that God loves them.  And I say to them, ‘You are loved for all of eternity because, with God, there is no such thing as the passage of time.  You are loved personally and not with a kind of anonymous love, that cannot be love. You are loved just as you, with your goodness and evil, with your miseries and your virtues. And you are looked at with this gaze of love that the Evangelist talks of when he notes, Jesus looked at him and loved him.’  This is the great truth to be spoken about and proclaimed: it is what all men hunger and thirst for.  They need to discover that they are loved, that they are loved with a love that can never be discouraged.”      Henri Caffarel, Interview Radio Canada, 1980
Opening of the First Session, Click on the photo 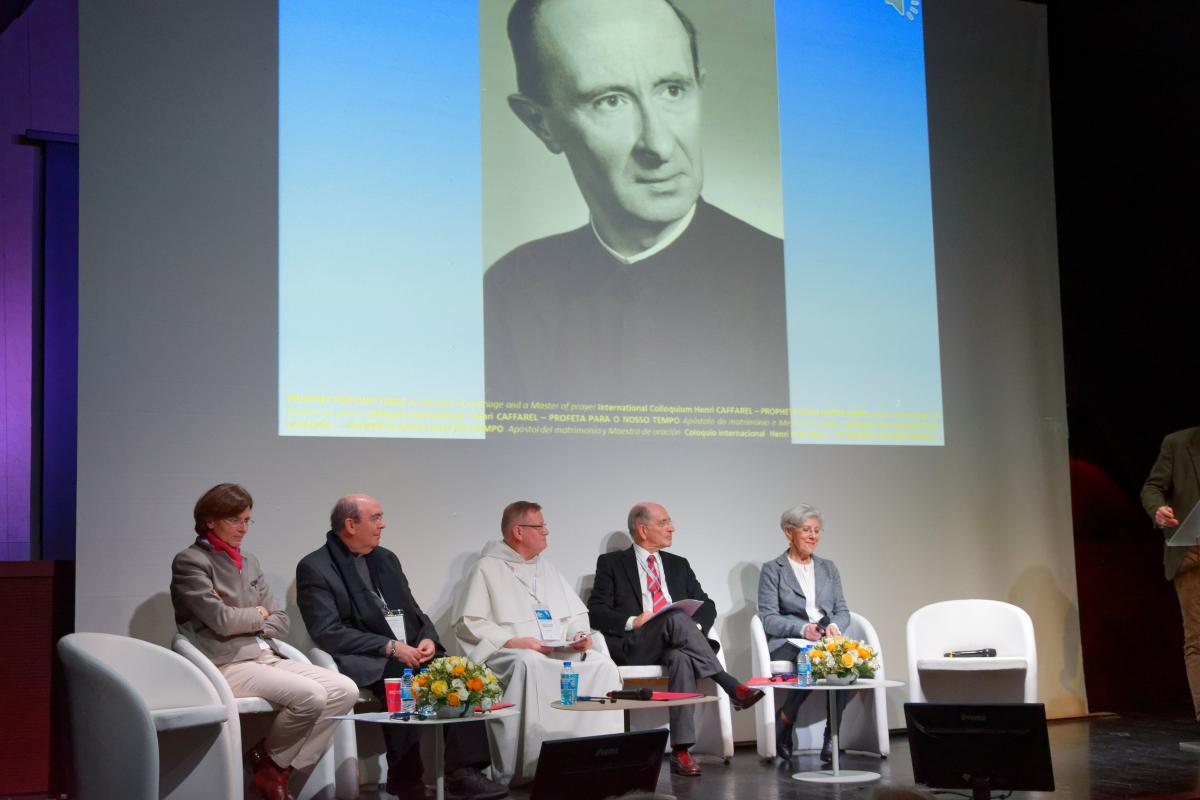 Father Paul-Dominique Marcovits, o.p. (France), diocesan postulator and then editor of the Cause for Canonisation of Father Henri Caffarel opened the Colloquium with a talk entitled, A Man of Faith.
“March 1923. At the age of twenty, Jesus Christ, in an instant became someone for me.”  That is where everything started.  Father Caffarel never stopped talking about the God, who “had seized” him.  “Entering ever more deeply into this intimacy and lead others to it too, that has been my only wish.”  He encouraged “seekers of God” in his wake.  Christ’s proposal to everyone is “his love, or rather, a reciprocity of love.”
access to video, click on the photo                                                     Speaker’s text 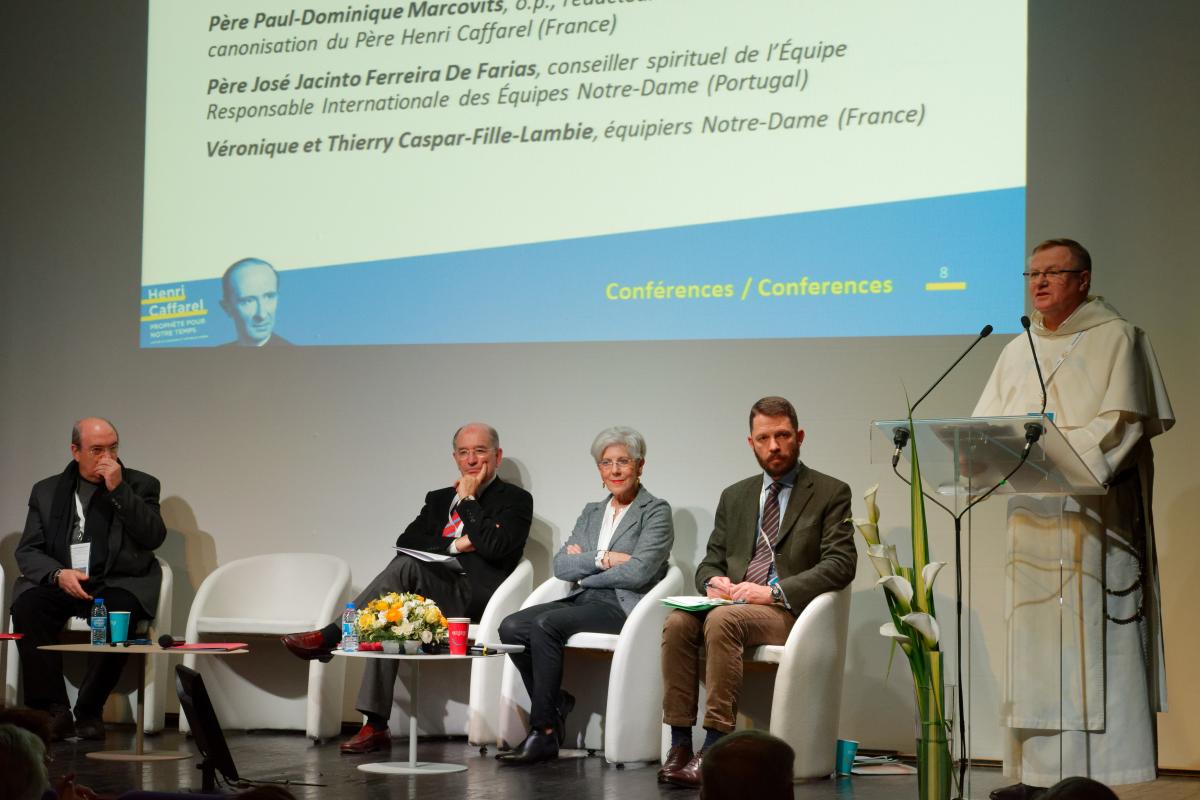 Father José Jacinto Ferreira De Farias (Portugal), Spiritual Counsellor to the International Leading Team, looked into The Spiritual Sources of Father Caffarel’s Vocation.
In the wake of this encounter with Christ, Henri Caffarel made up his mind to be would be a priest. He ardently wished for the monastic life, “I am nostalgic for the monastery!” but he added, “If my priesthood was in any way efficient, I know that it was due to my practice of private prayer.”  This unachieved desire was to be fruitful in his life and in what he went on to found, including the Charter that was inspired by the Rule for monks.
access to video, click on the photo                                                     Speaker’s text 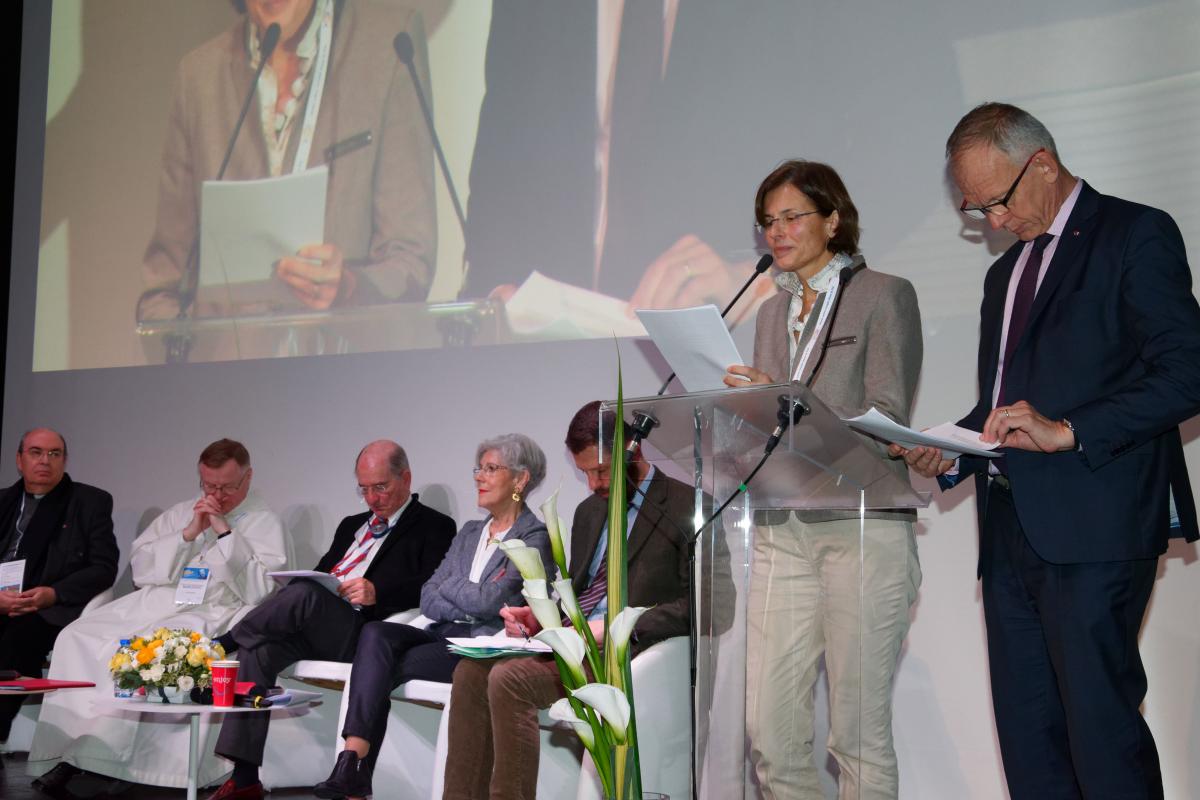 The Round Table discussion that finished up this first session brought together, under the session presidency of Rémi & Françoise Gaussel, Team members from France and members of the International Leading Team, Father Paul-Dominique Marcovits and the Great Witnesses, Sylvestre & Bernardette Minlekibe, Team members from Togo and Responsible Couple for the French-speaking African Super-Region (2010-2015).  They commented on clips illustrating testimonials from Colombia (He gave us God), the United States (Contemplation of Joseph and Mary as a Couple) and France (Marie-Hélène Mathieu, Founder of Office Chrétien des Handicapés).
access to video, click on the photo 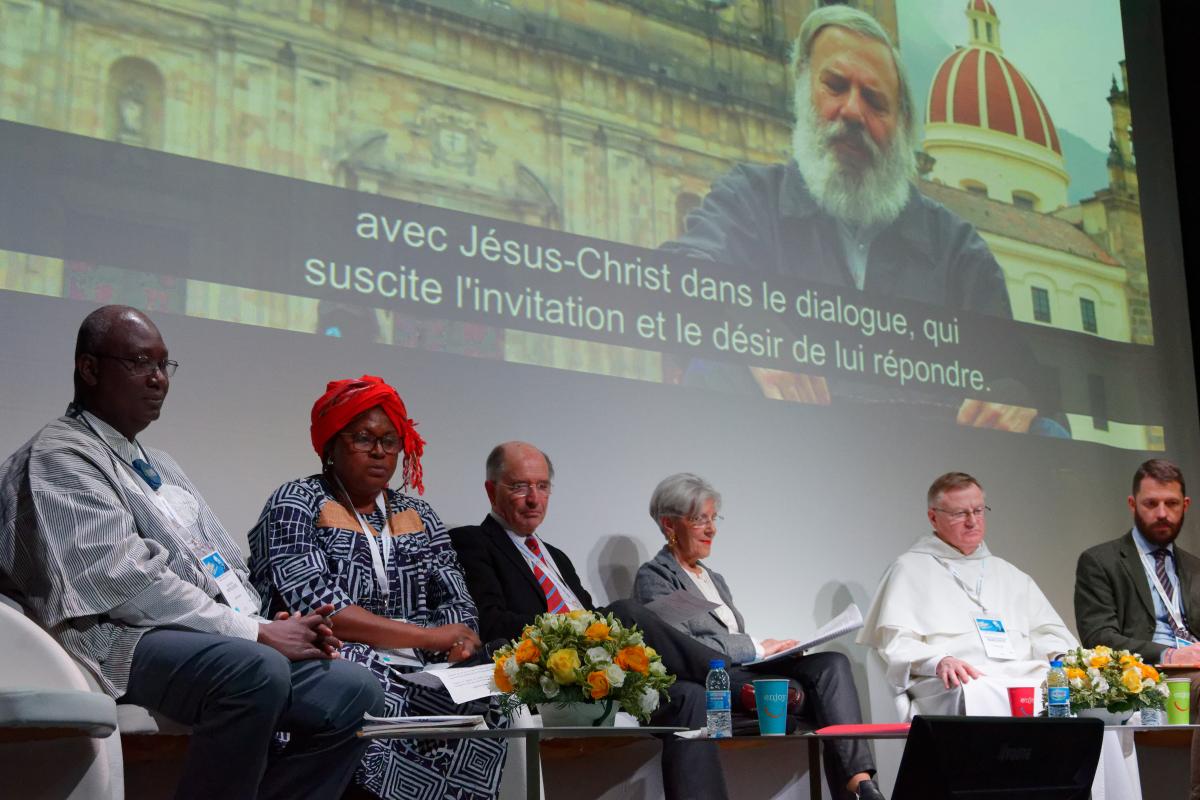 Friday Afternoon : The second session concentrated on a central aspect of Father Caffarel’s personality. Henri Caffarel, A Founder within the Church.  Clarita & Edgardo Bernal Fandino, Team members from Columbia and members of the International Leading Team, presided over this session.
“This is exactly why I make such an effort to help young people and adults.  And indeed, I was going to say “to discover” prayer. But you see, I hesitate to use that word, I try to help them experience God.  In the beginning when I was a priest, I used to say to myself, ‘I will talk about God, about this God that has a face, about this God who became incarnate, about this God who is Jesus Christ, about this God who gave everything for mankind.’ And then afterwards, I realised that talking about God is so difficult!  We must do more, we must do it better, we must invite people to experience God.”  Henri Caffarel, Radioscopie Interview, France-Inter, March 15th, 1973.
Opening of the Second Session, Click on the photo 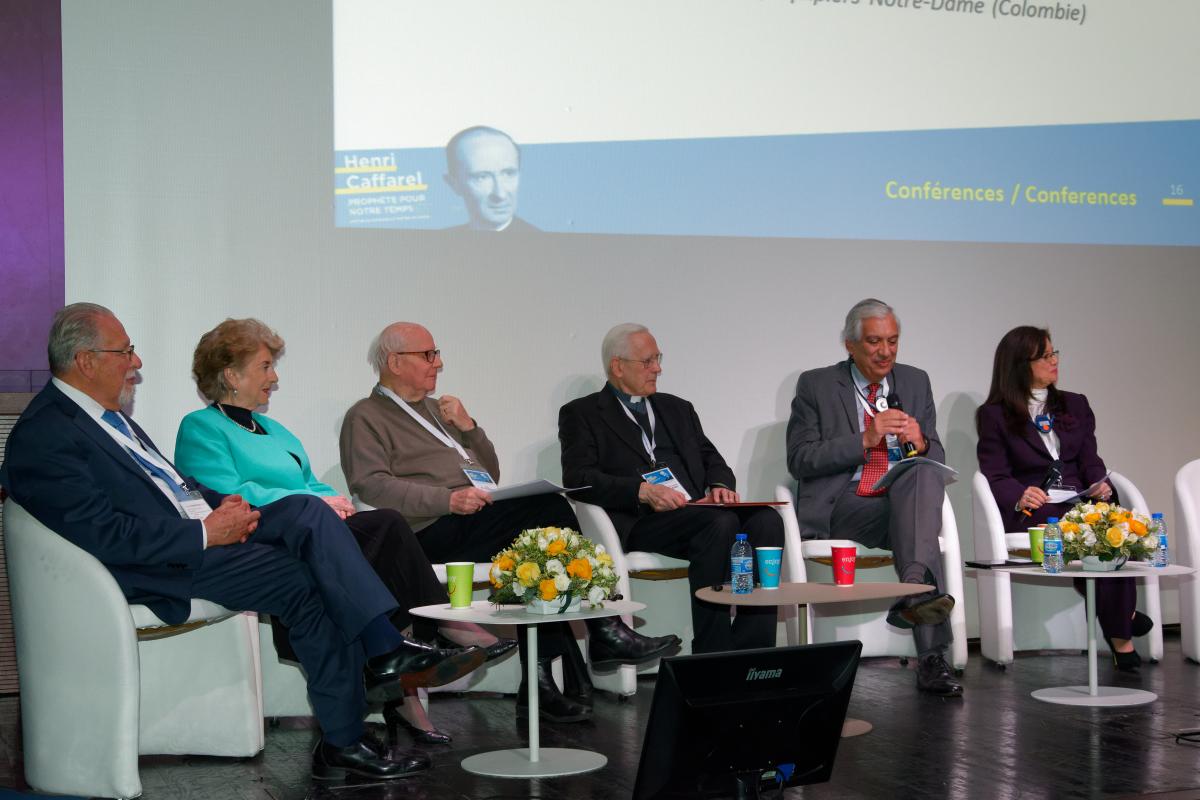 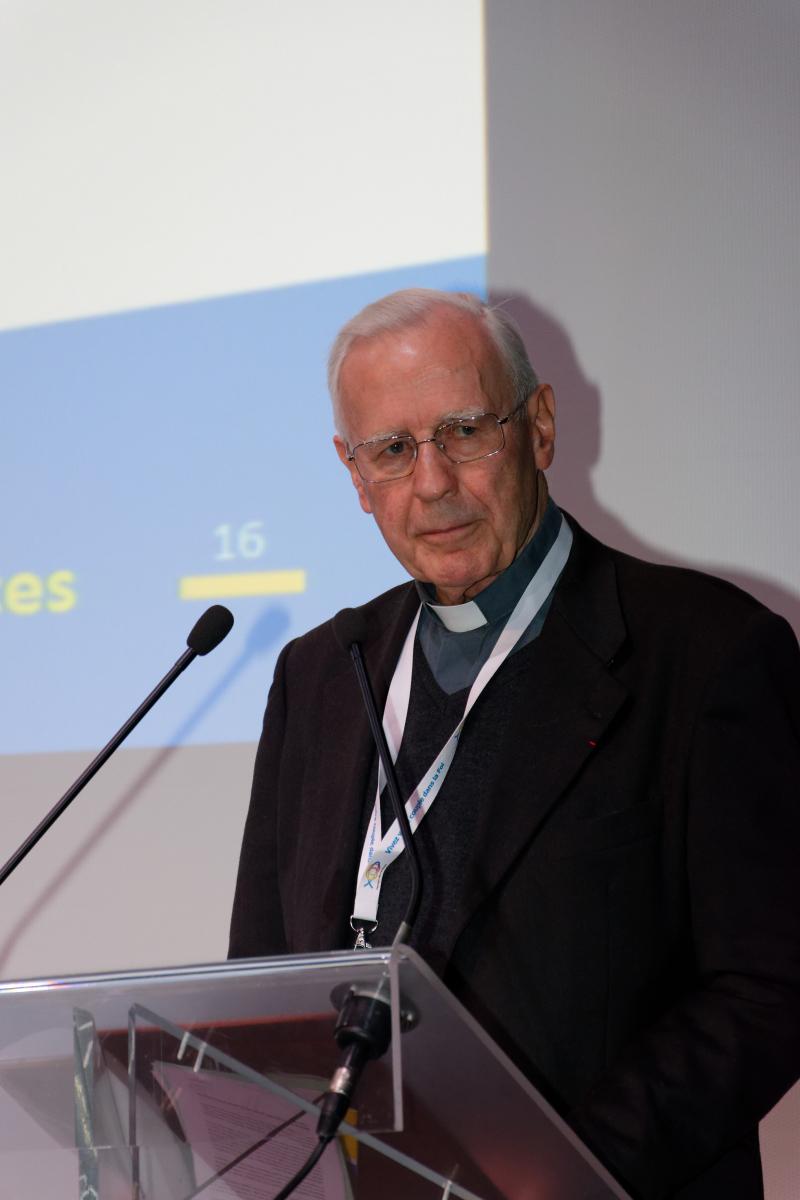 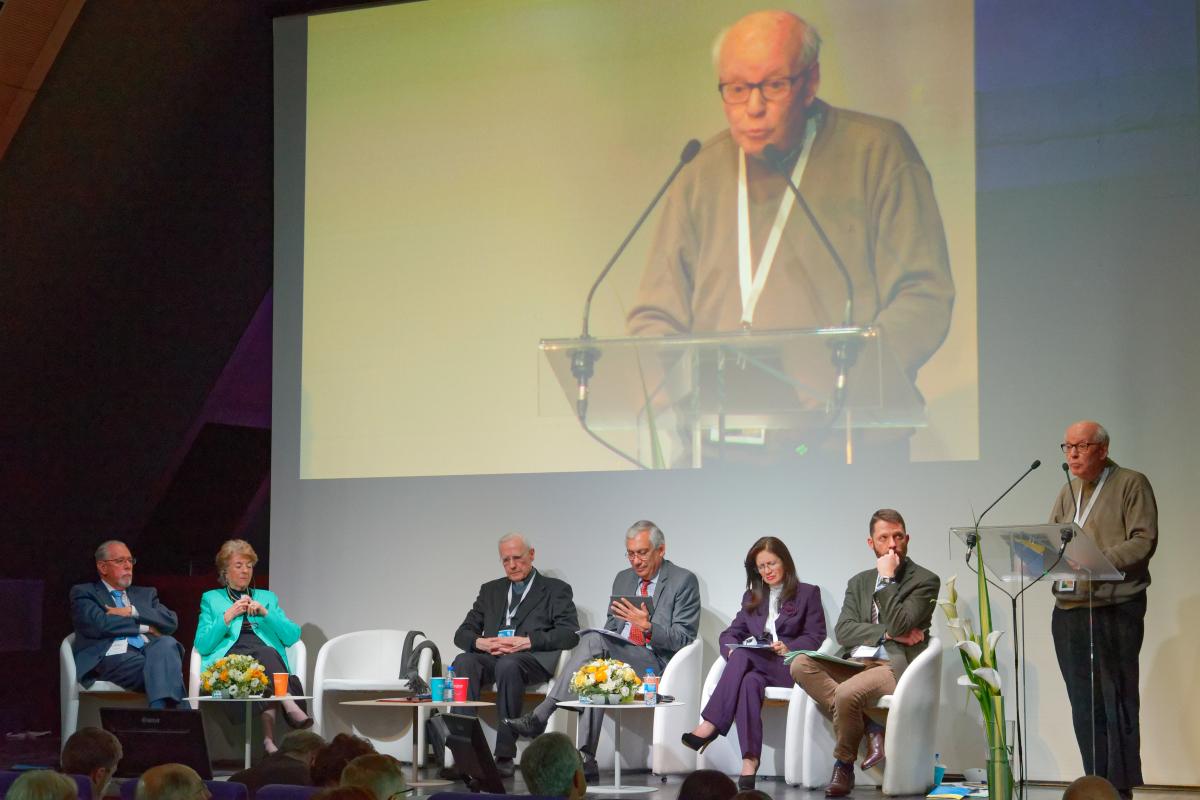 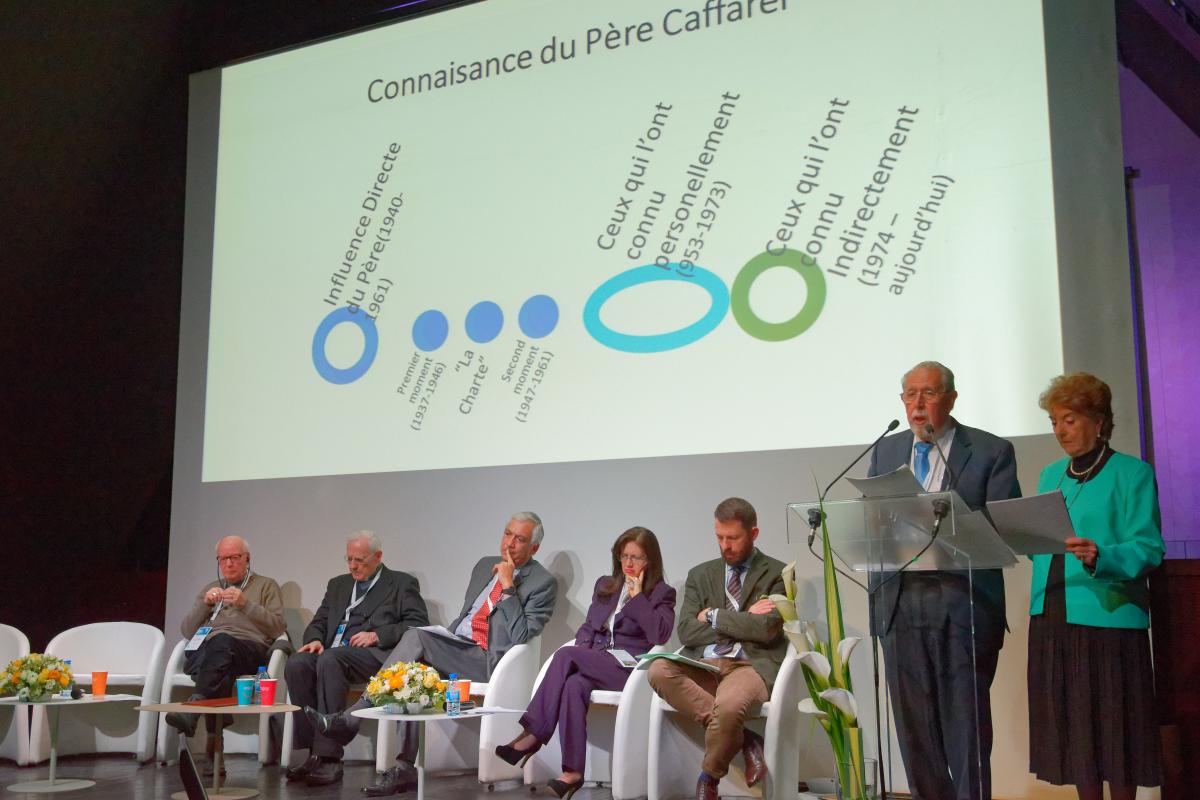 The Round Table discussion, that finished up this second session, brought together under the session presidency of Clarita & Edgardo Bernal Fandino, members of Teams of Our Lady, members of the International Leading Team, Monsignor François Fleischmann and the Great Witnesses, Silvia & Francisco de Assis Pontes, Team members from Brazil, members of the International Leading Team (2006-2012). They commented on clips illustrating testimonials from Belgium (Intercession), Spain (Formation & Training) and Great Britain (The International Nature of Teams of Our Lady).
access to video, click on the photo 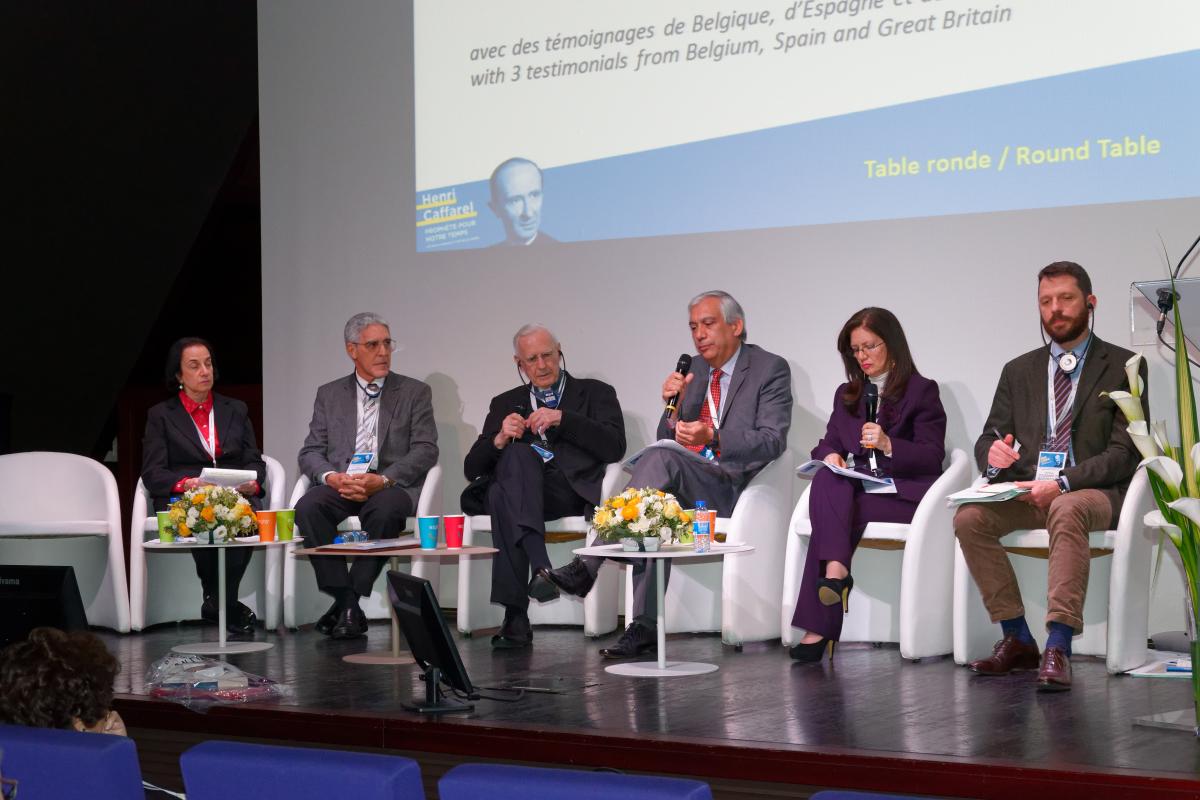 Saturday Morning, December 9th. The third session tackled a central part of Father Caffarel’s personality, Henri Caffarel, A Master of Prayer and Spiritual Counsellor and was presided over by Monsignor Jérôme Beau, Auxiliary Bishop of Paris, President of the Collège des Bernardins.
“I am nostalgic for the monastery! I cannot leaf through a book about monasteries in the Middle Ages or hear the word ‘monastery’ without this unachieved vocation in me awakening a deep emotion. And it is very possible that I had not received this calling, I would not have been a priest, very concerned with daily prayer, and maybe even my priestly life would not have been so fruitful and very possibility, returning to that fidelity of which you spoke earlier, I would not have been able to do it.  I attributed truly everything to prayer in my life.”  Henri Caffarel, “Radioscopie,” France-Inter, March 15th, 1973
video of the whole Third Session, Click on the photo 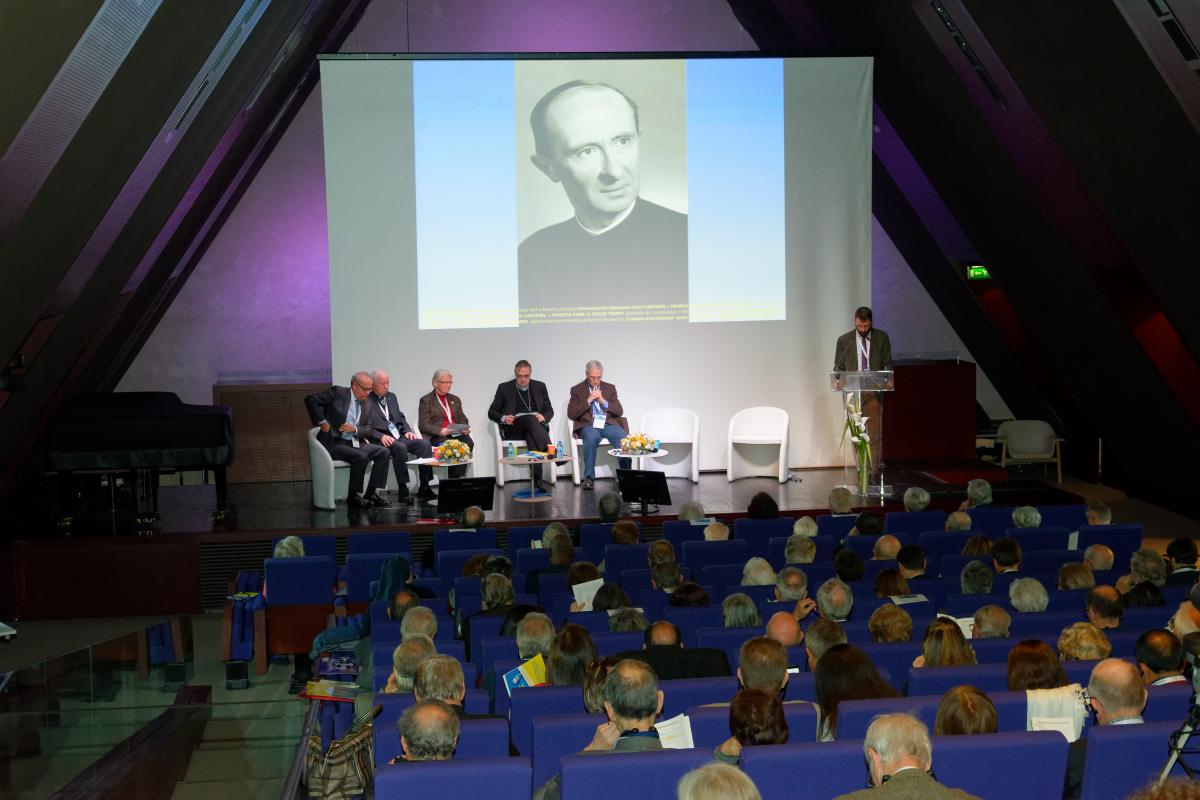 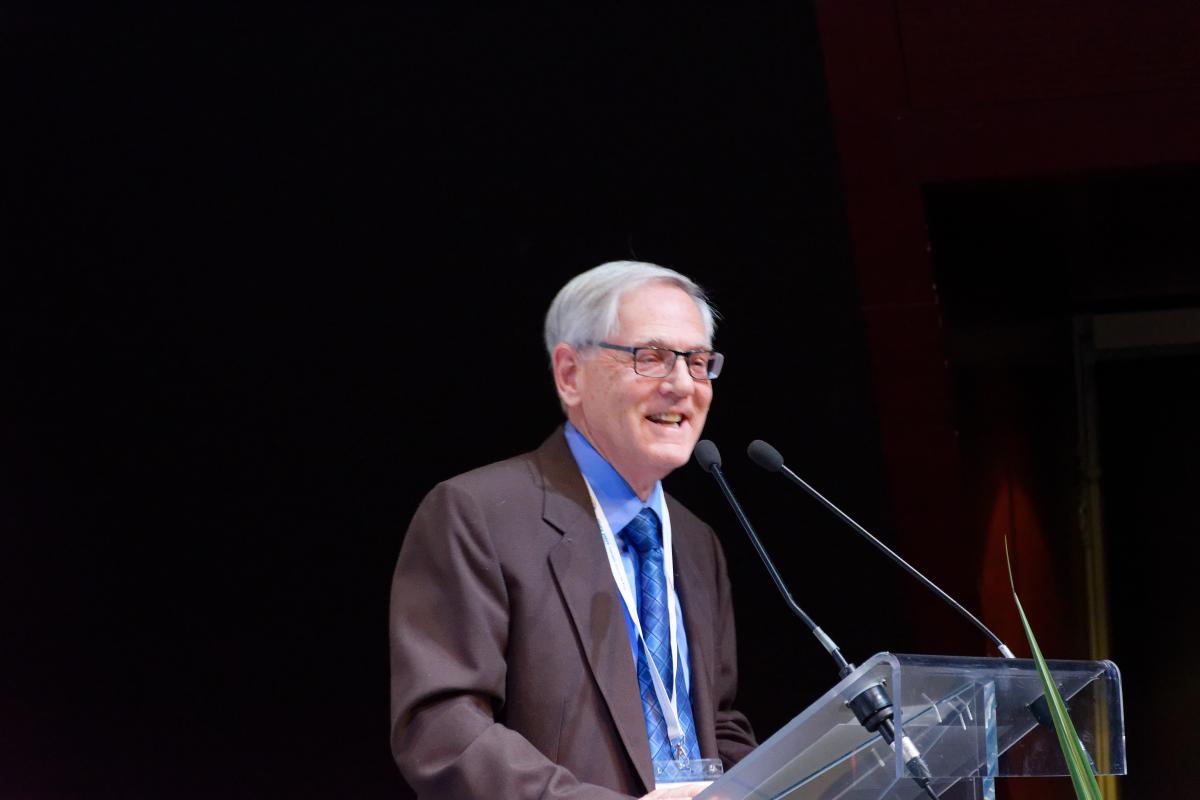 Amaya & José Antonio Marcén-Echandi (Spain), members of the International Leading Team and Father Gabriel Larraya Aguinaga, ofm.cap. (Spain), Spiritual Counsellor to the Spain Super-Region within the Teams movement (2010-2013), dealt with what is specific to Teams of Our Lady in a three-way conversation entitled, The Couple, the Team and the Priest.
The presence of the priest in Teams of Our Lady was very important to Father Henri Caffarel. Since the priest is the sign and presence of Christ, he is in the service of married love, the Magisterium and communion. Father Caffarel used to say that “the alliance between priest and marriage that is created in Teams helps the vital dialogue so that the Church’s thinking tries to respond not only to the needs, but also the aspiration of couples.”
access to the whole Third Session, click on the photo                                                     Speaker’s text 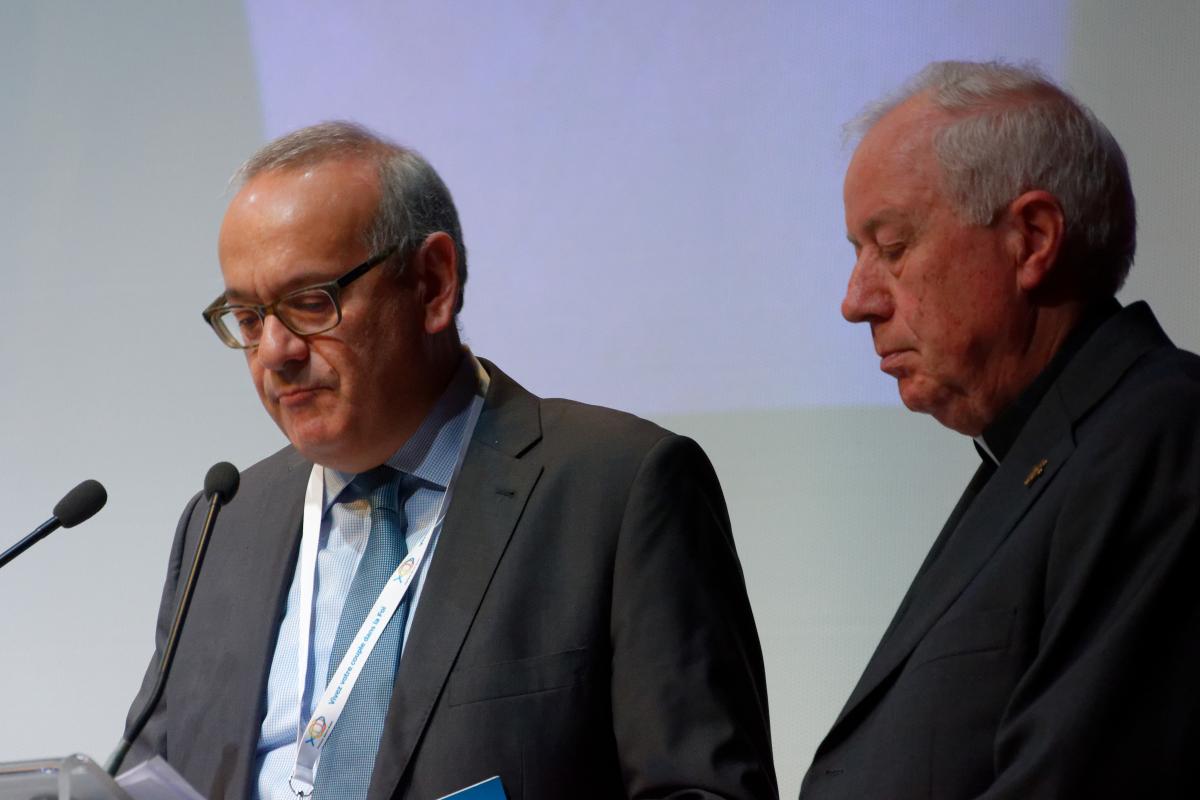 Monique Cheuleu (Cameroon), Coordinator of French-speaking Africa within the Fraternity of Our Lady of the Resurrection, was supposed to come and speak on Henri Caffarel and the Spiritual Accompaniment of Widowhood. Since she could not obtain her visa to leave Cameroon, her speech was read by Madeleine Aubert.
As early as 1941, Father Henri Caffarel was sought after by young war widows. With them, he sought the meaning and sense of this new situation and life state, “As long as widows remain completely offered up to the Lord, nothing will separate them from the person who, although admittedly is invisible, is alive, forever loving, united to He who is Love itself.  He was their companion on the road, he has become their companion for eternity... Love is stronger than death.”
access to the whole Third Session, click on the photo                                                     Speaker’s text 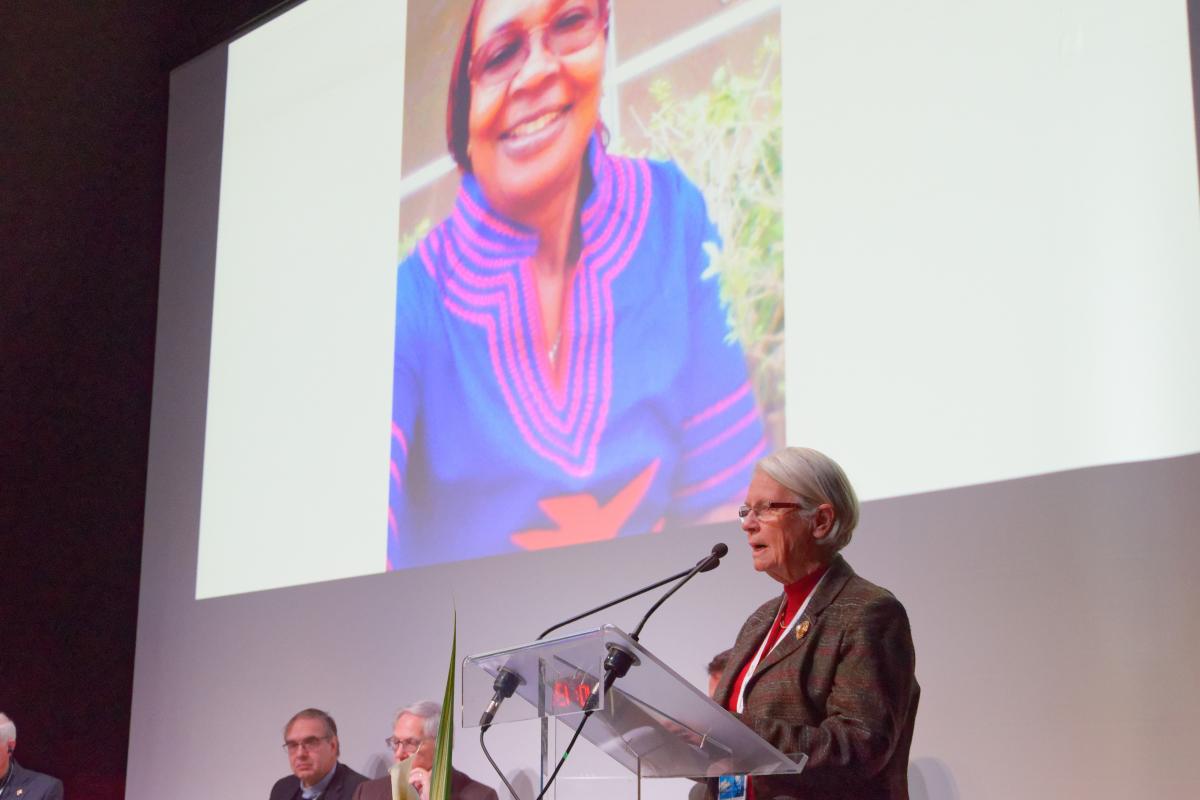 The Round Table discussion, that finished up this third session, brought together under the session presidency of Monsignor Jérôme Beau, President of the Collège des Bernardins, Jacques Gauthier and the Great Witnesses, Elaine & John Cogavin, Team members from Ireland, members of the International Leading Team (2001-2007) and Father Patsy Kelly, Spiritual Counsellor to a Team of Our Lady in Ireland. They commented on clips illustrating testimonials from France (Prayer), Lebanon (Priests and Couples in a Team), Poland (Prayer) and Portugal (The Spirituality of Widowhood).
access to the whole Third Session, click on the photo 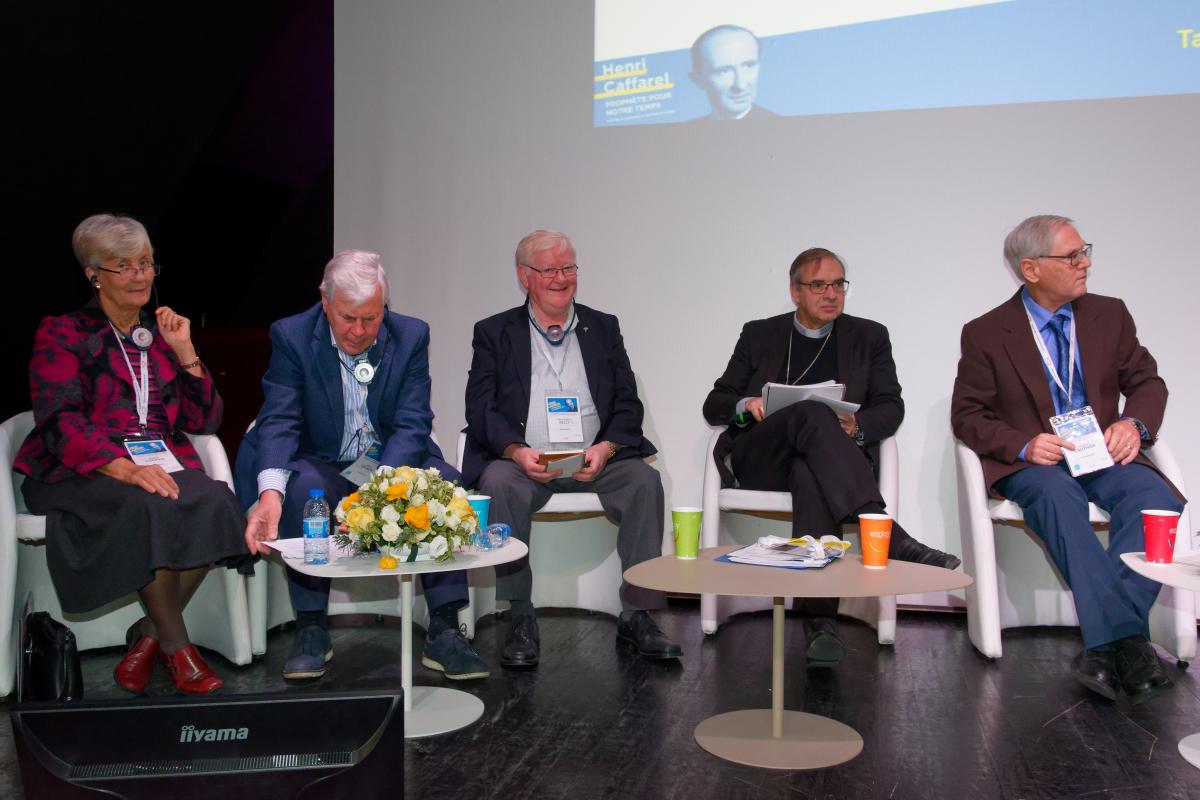 Saturday Afternoon.  The fourth session returned to the central theme in Father Caffarel’s work, Henri Caffarel, A Prophet for Couples and Marriage, and was presided over by Father Jacques de Longeaux, President of the Faculty of Our Lady, at the Collège des Bernardins.
“Your couple will bear witness to God, in an even more explicit fashion, if it is the union of two seekers of God, according to the admirable expression in the Psalms. Two seekers, whose intelligence and hearts are eager to know, meet God and be united to him, because they have understood that God is the great reality, because they are interested in God above all else.” Henri Caffarel, Talk, “Teams of Our Lady and Atheism,” Rome, 1970.
Opening of the Fourth Session, Click on the photo 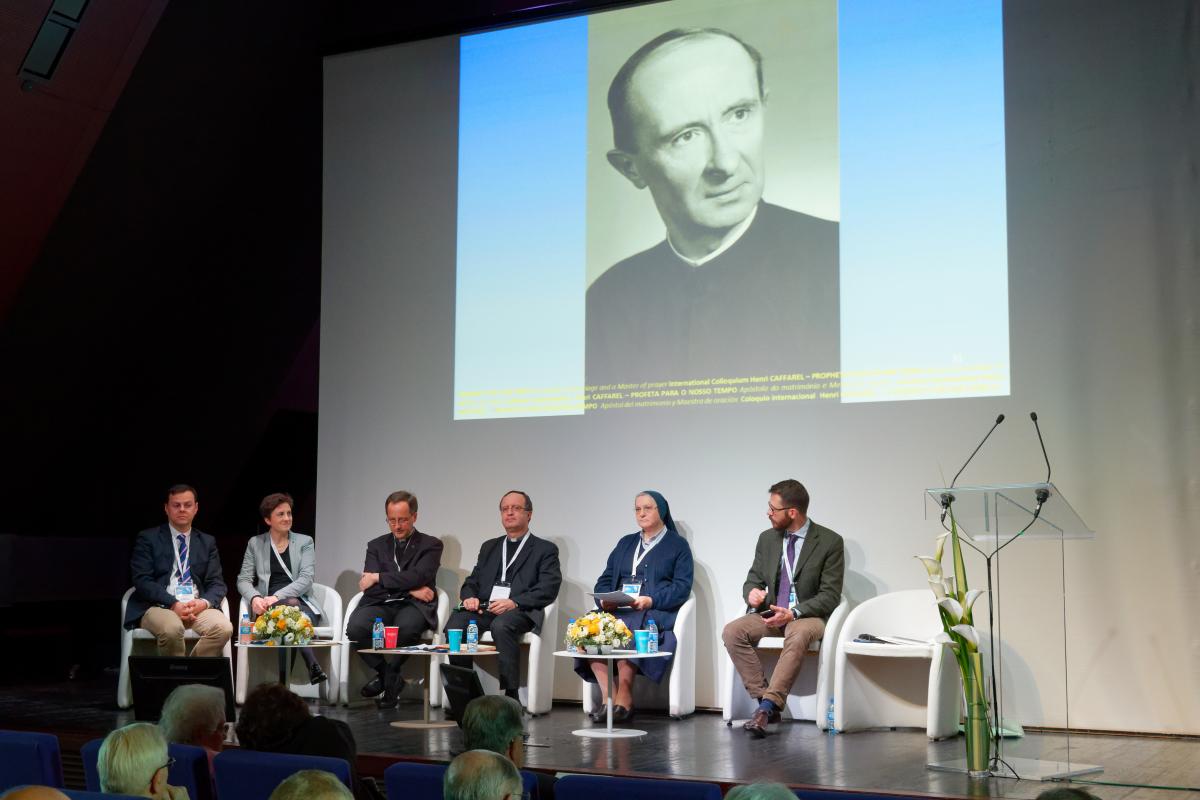 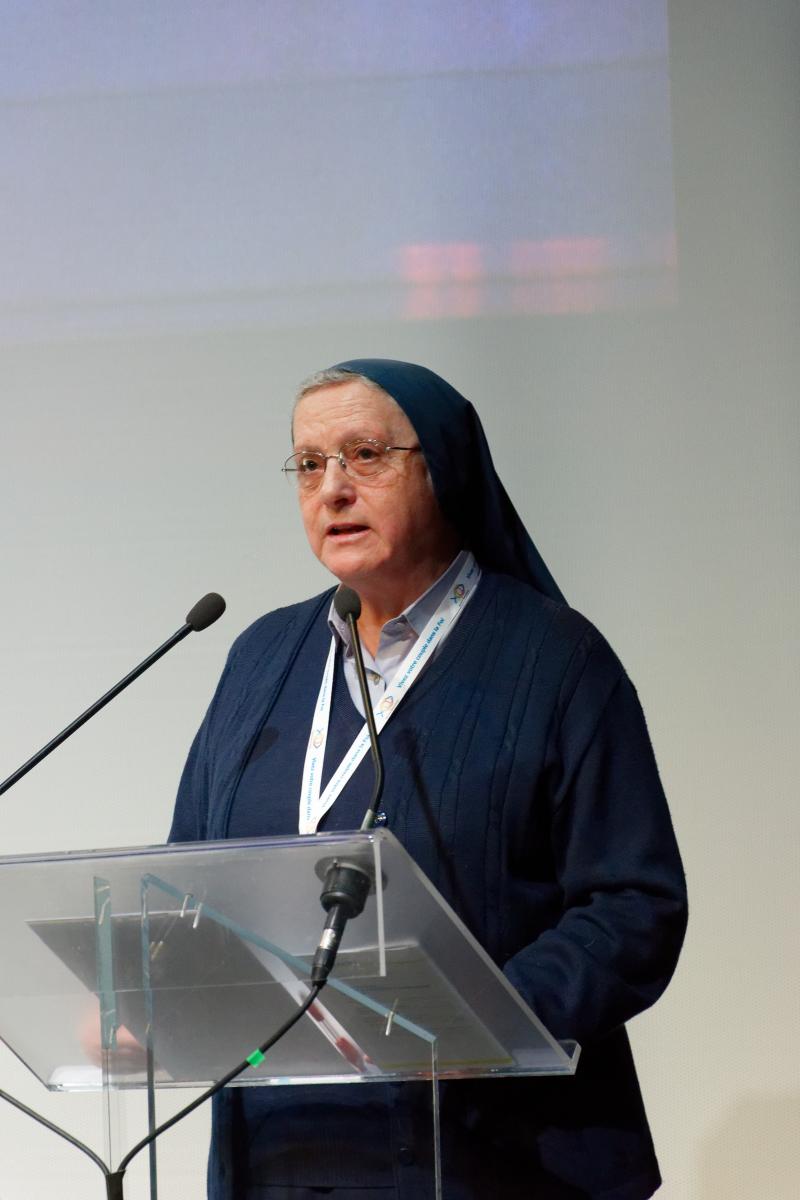 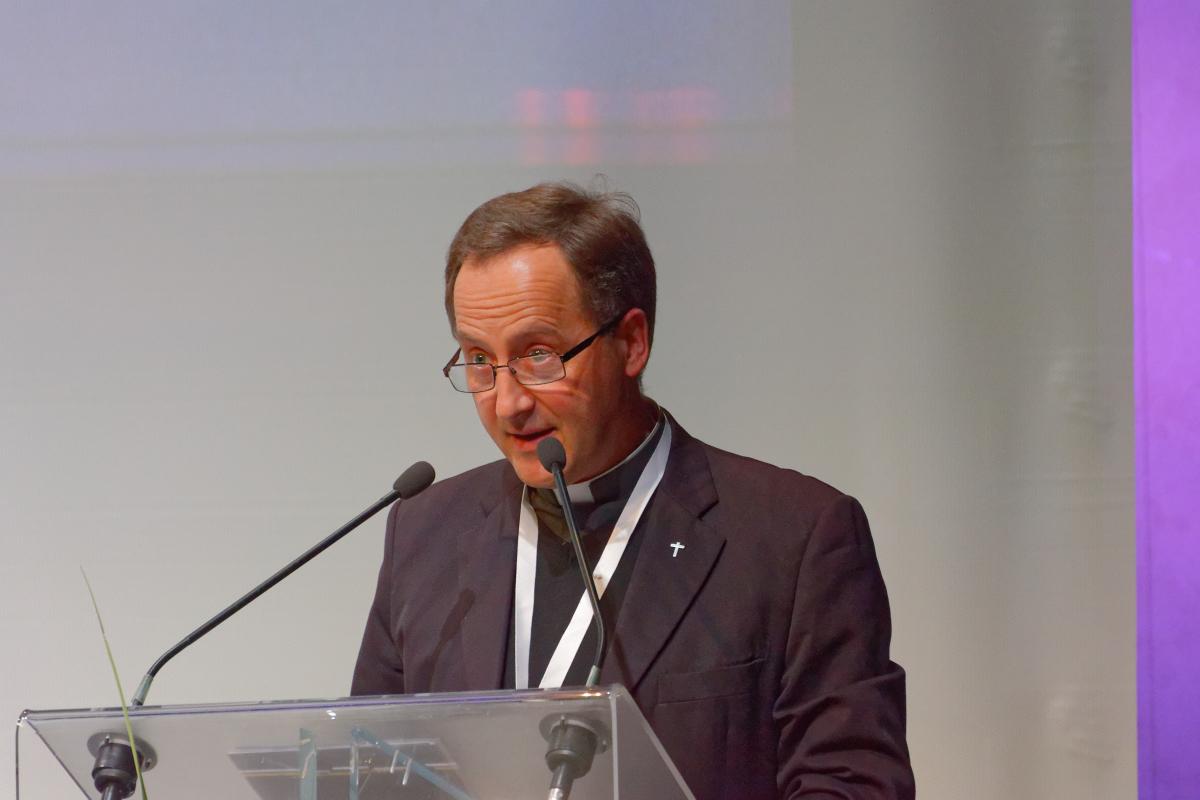 Delphine & Antoine Quantin (France), gave their point of view as Team members on the subject of Christ at the Centre of the Couple.
Father Henri Caffarel was insistent on married Christian’s spirituality.  The Charter of Teams of Our Lady outlines the means to be put in place.  Additionally, “The word ‘Team’ is preferred above all others, and implies the idea of a precise goal, pursued actively and in common with others.” Everything is a means to recognising the sanctifying presence of Christ in young couple’s lives.  “I love this spouse, with Christ’s heart and it is indeed with married love that I love him.”
access to video, click on the photo                                                     Speaker’s text 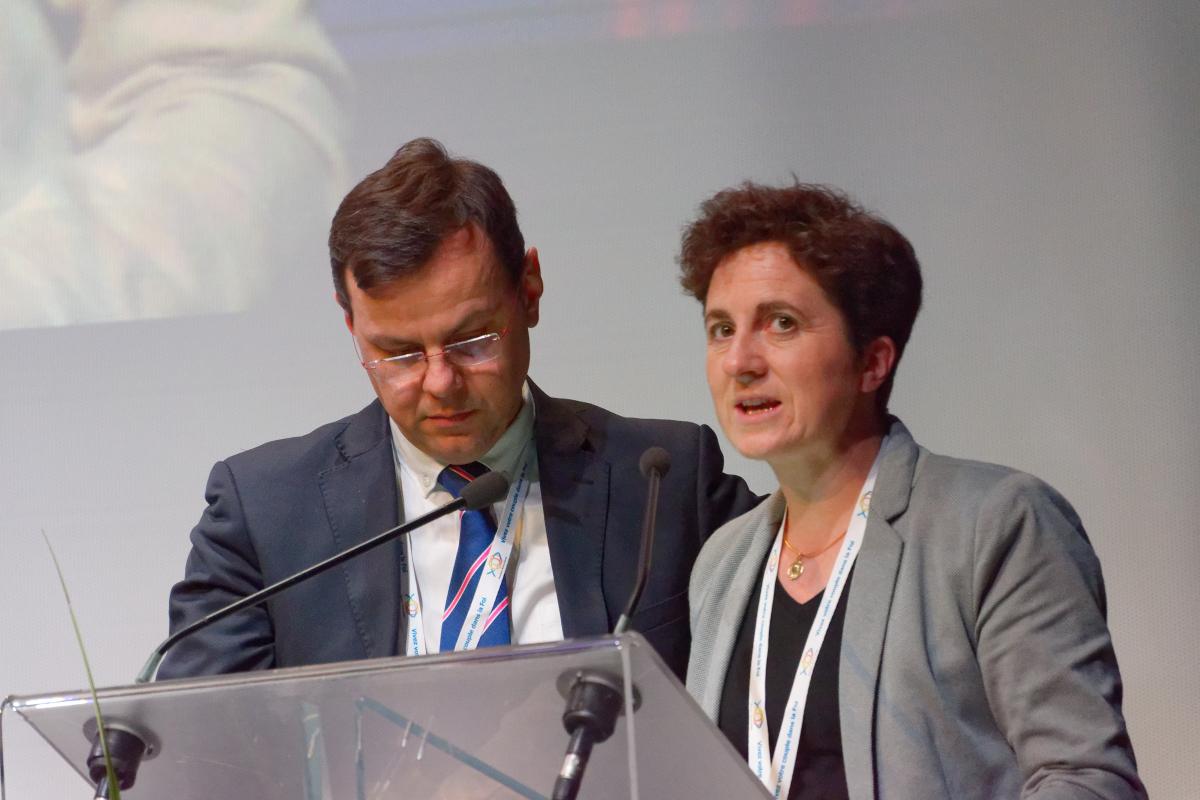 The Round Table discussion, that finished up this fourth session, under the session presidency of Father Jacques de Longeaux, President of the Faculty of Our Lady at the Collège des Bernardins, brought together Father Louis de Raynal, Sister Fernanda Barbiero as well as the Great Witnesses Teresa & Duarte Da Cunha, Team members from Portugal, members of the International Leading Team (1995-2001). They commented on clips illustrating testimonials from Brazil, (Father Caffarel’s Thinking as applied to the life of two couples), Italy (A young couple and their Team) and Togo (A Team meeting: The Couple’s Vocation and Mission).
access to video, click on the photo 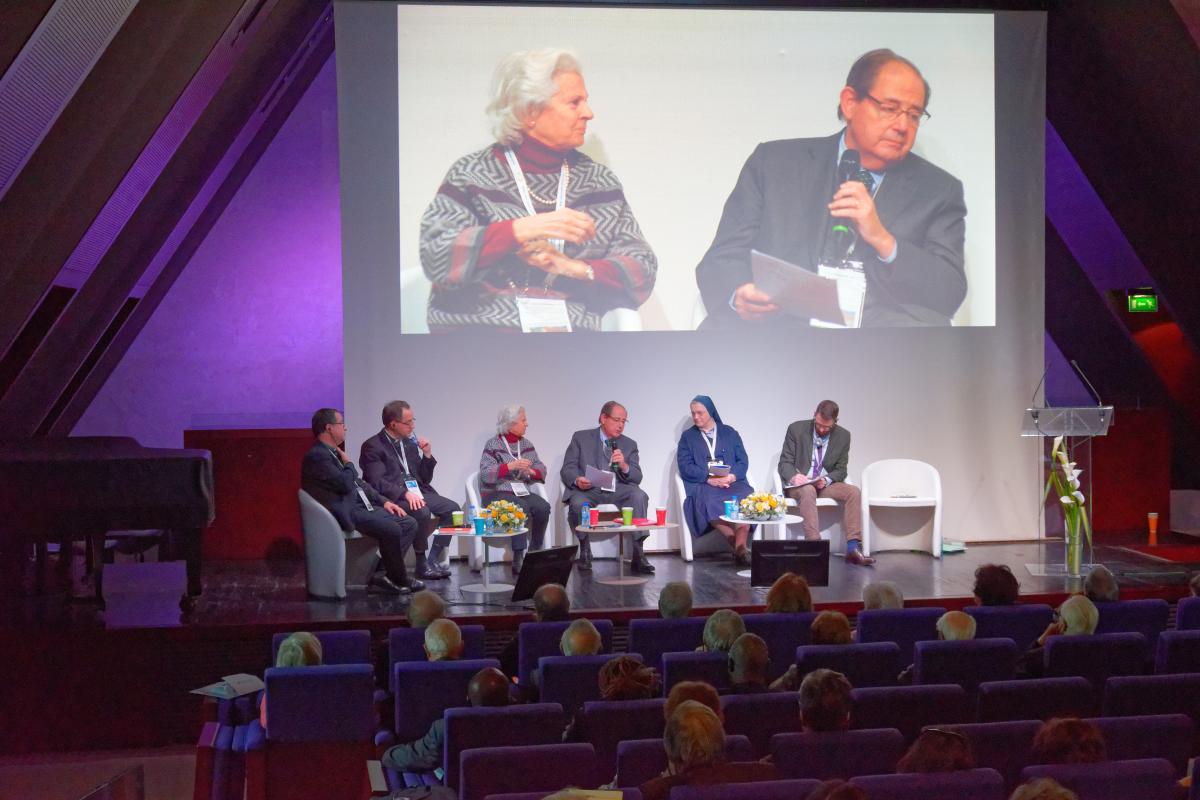 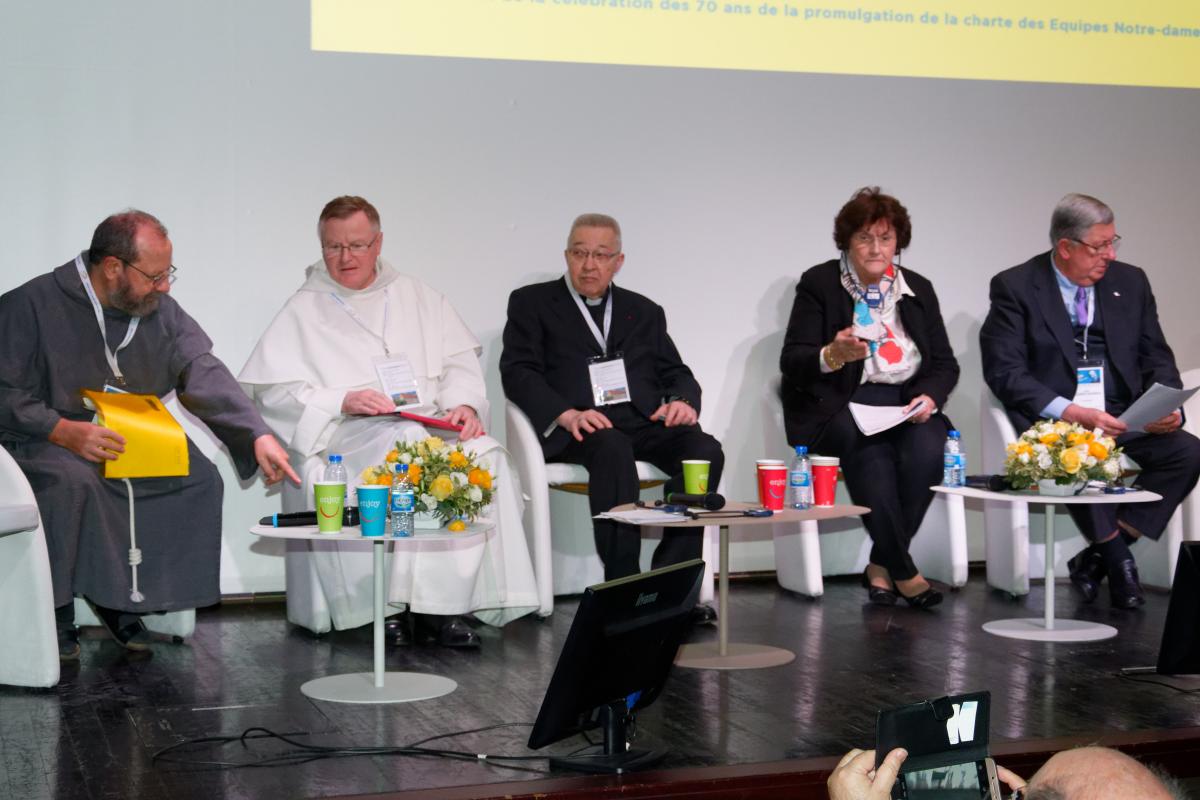 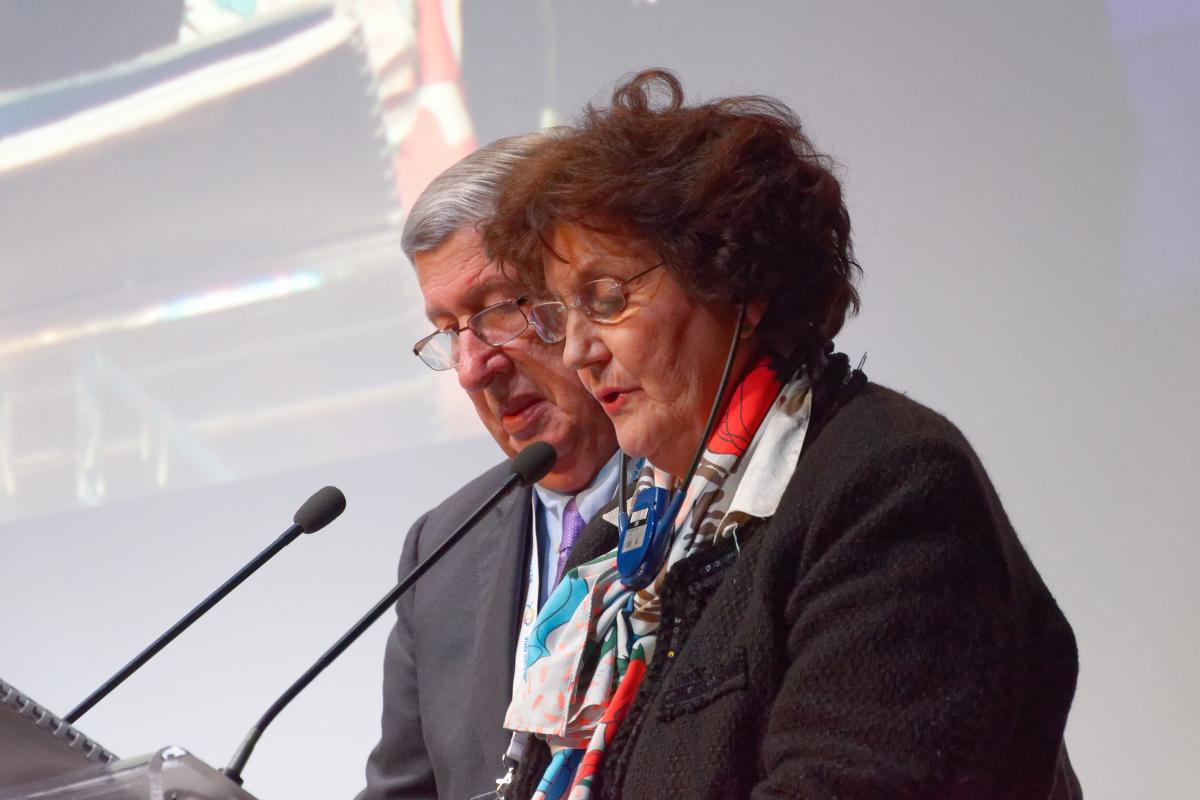 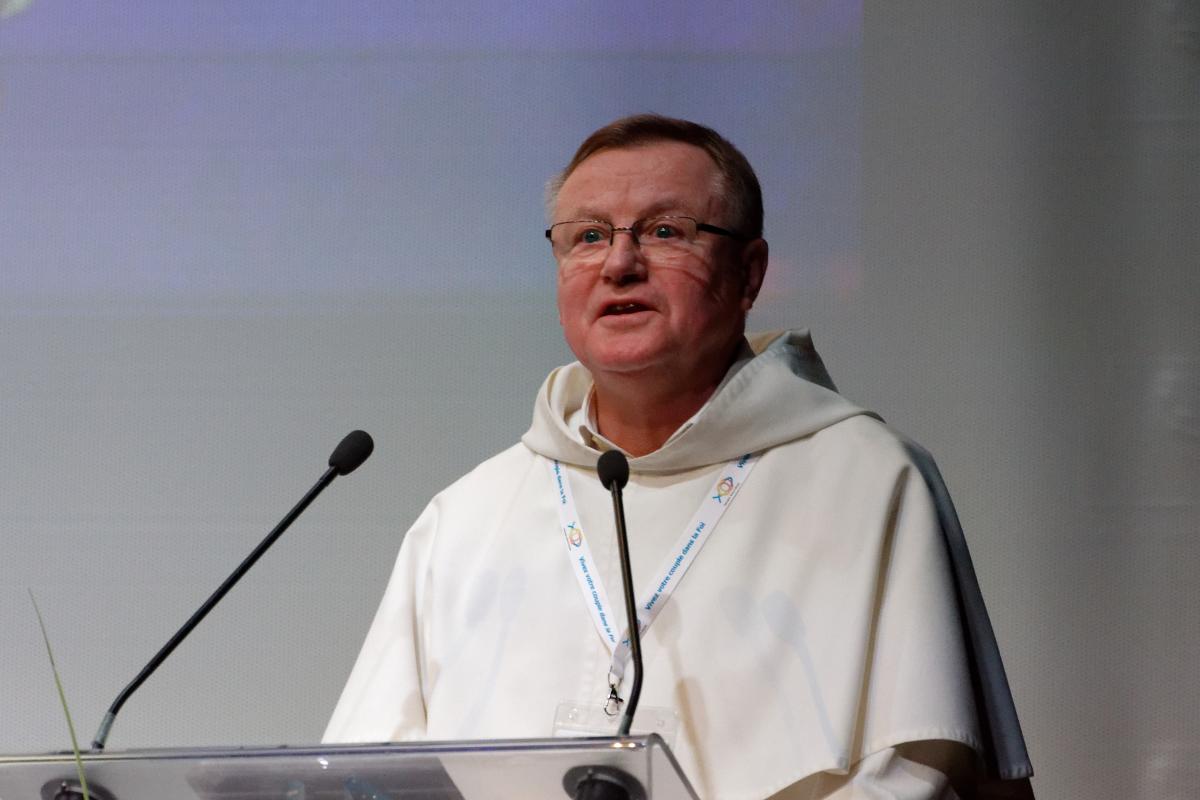 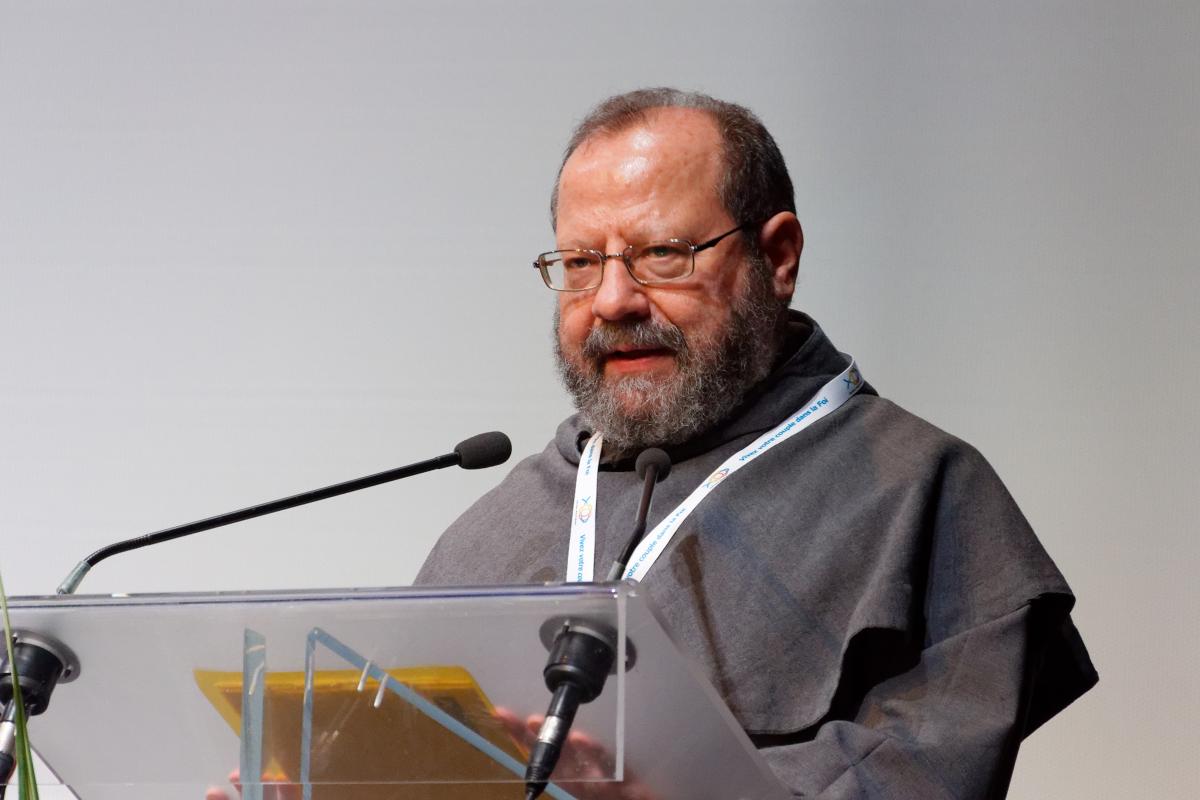 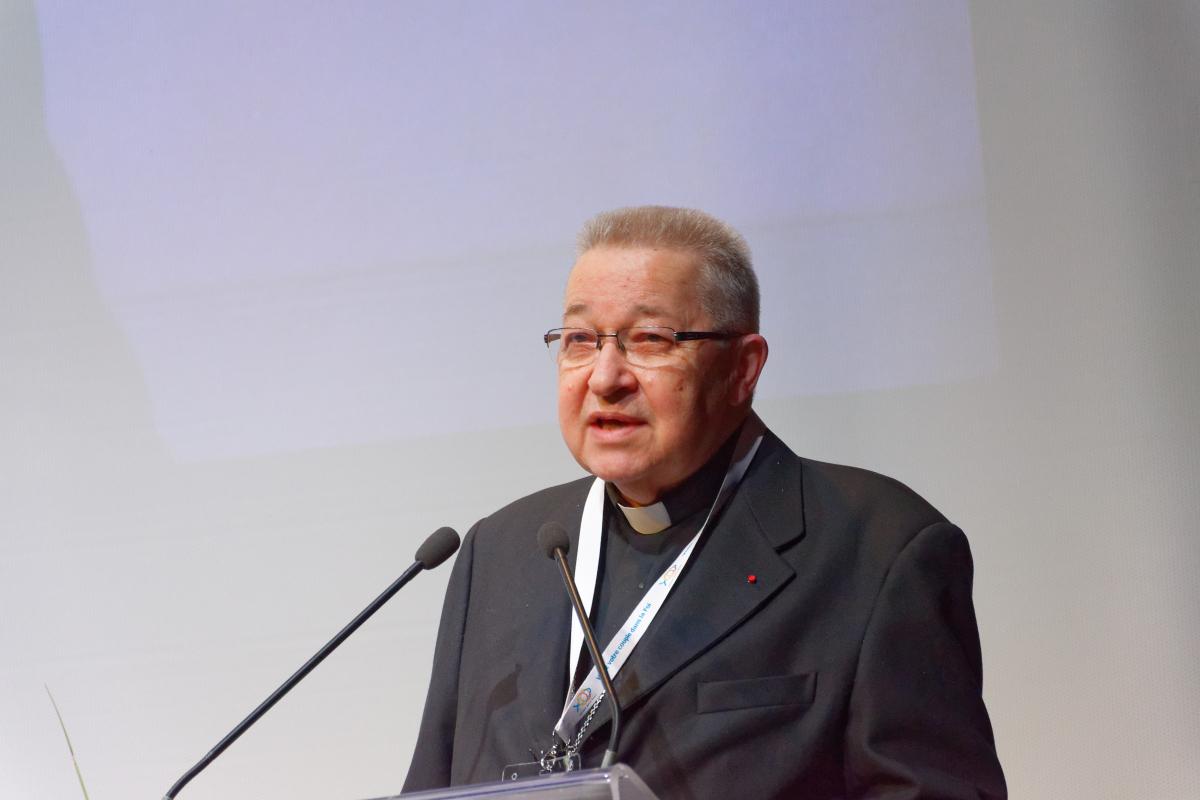