For the final act of the Closing of the Diocesan Enquiry for the Cause of Father Caffarel, Monsignor Éric Moulins-Beaufort, who presided over the closing ceremony, named a bearer to take the dossier to the Congregation for the Causes of Saints in Rome.  As is the norm, the diocesan postulator was designated to do this.  He solemnly swore to bear the dossier to Rome, “Be it at the risk of his life, facing storms or brigand attacks,” according to the Bishop’s words…

It is important to say immediately that everything went according to plan.  There was no storm, nor brigands, no policeman to give a traffic ticket.  The bearer was accompanied by Mrs Marie-Christine Guillon, the Vice-Postulator and her husband, François, Secretary of the Association ‘Friends of Father Caffarel.”  In a car piled high with the nine boxes of our precious dossier, we took the road from Paris to Turin, then Turin to Rome.

Of course, we visited Rome (a bit!) and here are three important memories!

First of all, Sunday, November 9th, feast of the dedication of the Lateran basilica, the Pope’s Cathedral.  In St Peter’s Square, we saw Pope Francis say the Angelus from his window high up.  A simple and true joy!  In the afternoon, we went to mass with Roman Team members, who were holding their Sector Gathering.  I spoke to them about the aims and meaning of our presence in Rome and they conveyed to us all their emotion!  It seemed to me that the Church was waiting for us, was receiving us.

The next day, November 10th, 9:30am, we were at the Congregation for the Causes of Saints. Father Paleri, the Roman Postulator, Marie-Christine Genillon, her husband and I as the bearer arrived with our dossier.  The Chancellor welcomed us warmly, asked us to sit down and after asking for a few details, filled out a receipt and gave it to me.  We put the boxes on shelves and then left.  It was the end of eight years of work…and it lasted only twenty minutes!  We truly appreciated the simplicity of the procedure.  Now, may the Lord watch over the continuation of the work.

Final memory.  Immediately after handing over the dossier, we went up to St Peter’s.  Of course, it’s magnificent.  Important moment: there’s a chapel where the Holy Sacrament is exposed.  I still recall the light in my eyes and the moment of intense prayer in my heart as Marie-Christine and I returned to the Lord these past eight years of work.  We also prayed for all those other people, who have worked in so many different ways for the Cause, as well as the witnesses of Father Caffarel’s life.  You were present with us, you ‘The Friends of Father Caffarel’.  You were all there!  Thank God!  But there was something even more important:  we realised that there is still work to be done. In continuing to talk about Father Caffarel, we announce the beauty of the sacrament of marriage and the importance of prayer.  We have a tremendous treasure to share and this is the goal of the long path to canonisation. 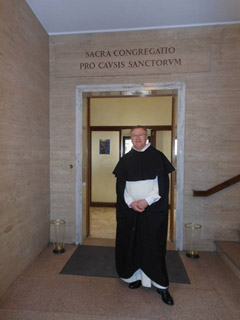